When I heard about a seeded batch of bread sporting the catchy name 'LivLife' and purporting to be suitable for diabetics, I was just a little cynical, truth be told. I've eaten foods claiming to be 'suitable for diabetics' over my 27 years with T1 and have either learned the hard lesson of just what too much aspartame sweetener does to 'diabetic' chocolate, or learned the even harder way just how many carbs there are in 'diabetic' jam (around 60% of it is still pure sugar, in case you were about to make the mistake of slathering it on a piece of bread as a 'diabetic' snack.  See also: enough glucose to power a rocket).  But I do take genuine delight in a slice of bread - particularly anything anything close to a farmhouse seeded or granary kind. And there are many times when a sandwich, slice of toast or crumbly croutons would go down a treat.

Sadly most breads, even the seemingly 'safe' varieties like wholegrain pittas which have a GI score of around 57 (55 and under is considered low GI), seem to have an aggressive effect on my BG levels and turn even a saintly salad-filled lunch into a must-be-managed afternoon crisis.  So much so that in recent years I have all but given up on any kind of carb-wielding slice of bread.

The problem is, there are only so many salads you can eat before you've tried them all. 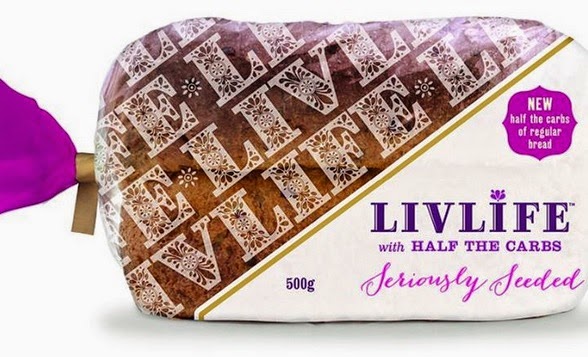 My first impressions of LivLife were good.  There were seeds bursting from the loaf and the smell of fresh, high-quality bread overwhelmed my senses as I opened the bag and peered inside.  The slices were small, but not too much so.  In fact, two slices together make a perfect-sized sandwich to take to work.  Actually I take two; because it tastes that good.

But the real test, beyond any pretty packaging or delectable aromas, is the impact on glucose levels. A blood-sugar bashing treat is one thing, but a daily lunch choice needs to be something which won't cause repeated post-prandial spikes that cause HbA1cs to jump around and complications to come a-knocking.

LivLife claims to be suitable for diabetics because it has half the carbs of other breads - in fact, it claims to have as little as 3.8g carbs per slice!  So a sandwich of two slices with a low-carb veggie or protein filling, should be less than 10g carbs per sandwich!

This week, I put my LivLife to the test and experimented my way through lunch breaks to see just what happened with the so-called 'suitable for diabetics' bread.

The CGM trace below was a trace I had after eating two small wholemeal pittas with bacon and avocado salad stuffed inside and a smattering of mayo to give it some 'yum'.  I had bolused 20 minutes before I ate, ensuring I'd allowed time for the insulin to hit my system and become active before I devoured my well-earned lunch. 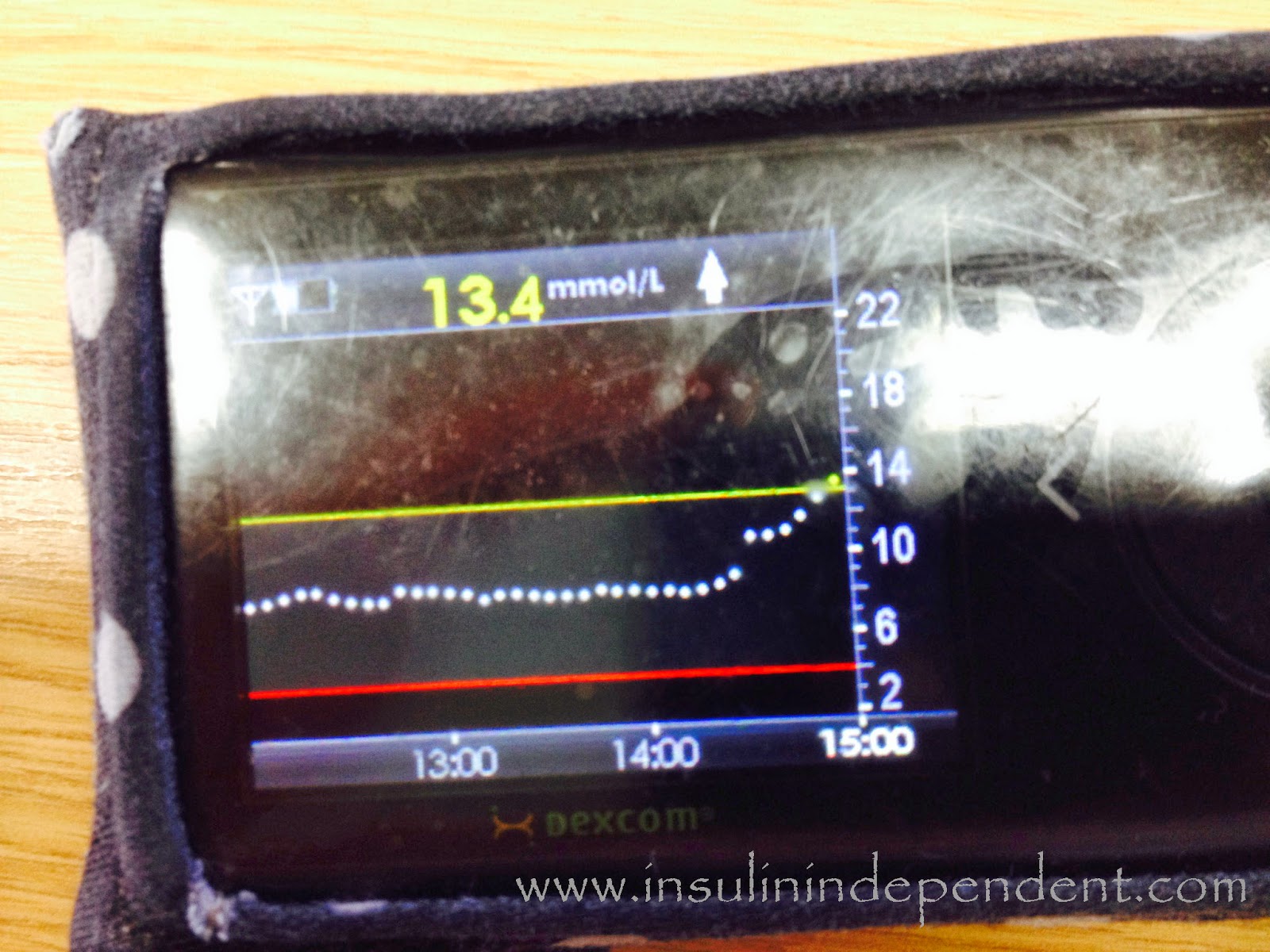 Within just one short hour of my (supposedly healthy) lunch the beautiful straight line I had been admiring all morning was gone after my 2pm lunch break and was replaced with a vertical sky-climber.  I tried this lunch three times with tweaks (once with more insulin; once a little earlier - which resulted in a nasty hypo pre-food).  This is not the way to enjoy food.

After too many frustrated days in a row I gave LivLife a whirl, and was presented with this: 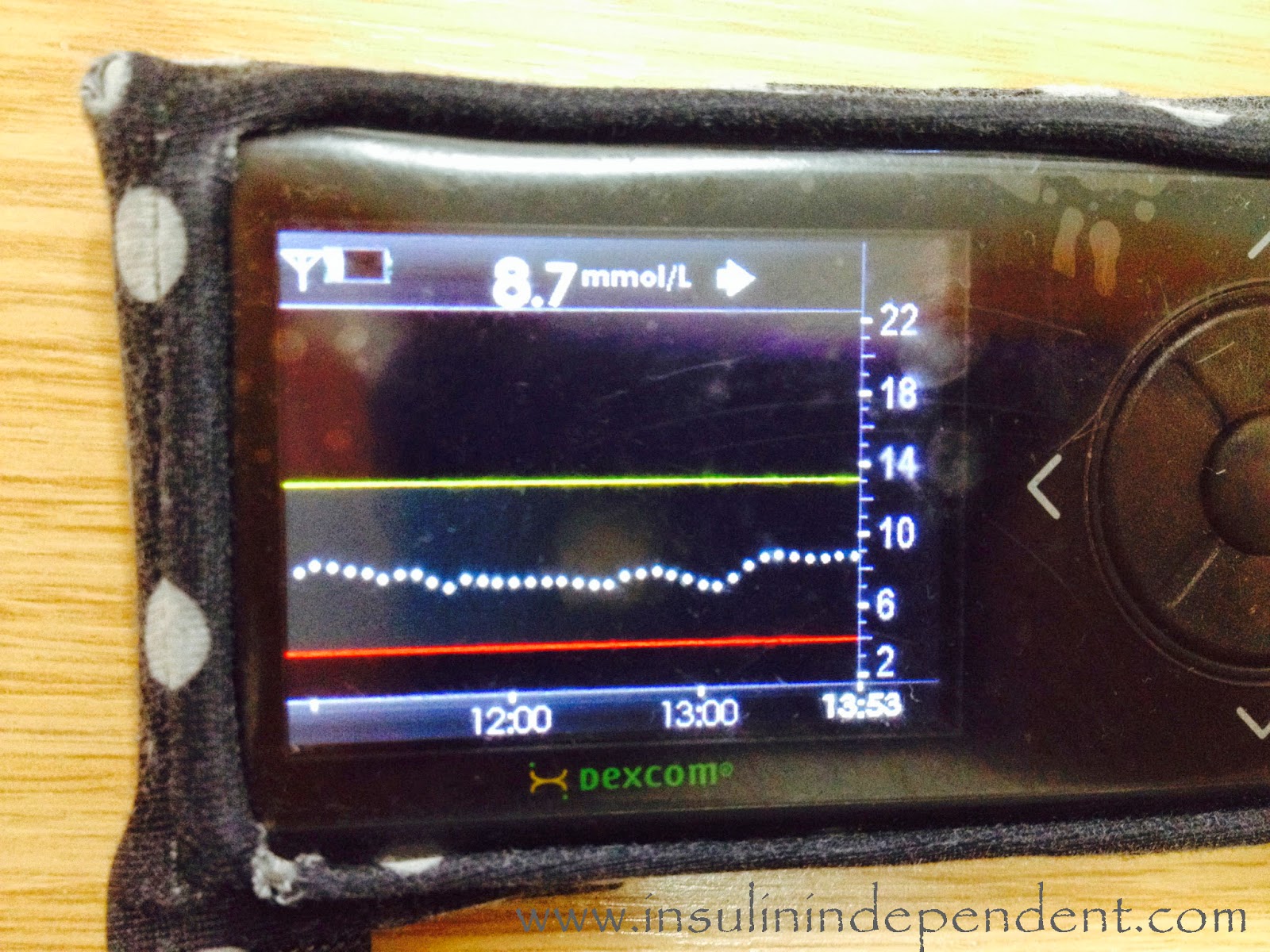 Now this is a CGM trace to enjoy!

This time I put the same accompaniments (bacon, avocado salad with mayo for yums) into two LivLife sandwiches, and the result was fantastic!  In case you can't tell, I bolused at 12.45pm and ate at 1pm. Both days I started at a respectable (but slightly high pre-meal) 8 mmol, but the outcome of removing most of the carbs but still enjoying something more substantial than just a salad, was a CGM trace that meant I wasn't going to be chasing corrections all afternoon.

So there you have it: LivLife really is suitable for diabetics, and even comes recommended by one.  If you are someone who likes to put away Joey from Friends kind of sandwiches you may need to make yours a triple-decker because the slices are about three quarters the size of a 'standard' loaf, slice.  But considering the carbs in a  modern standard slice are often nearing the 20g mark, and LivLife have managed the same taste and satisfying hunger-buster with just 3.8g carbs (with 2g fibre!), I think I can live with that!

You can get LivLife in Morrisons (only selected stores so find your most local one) and Ocado, where it should be in with all the other breads.

Let me know what you think in the comments or on email, and enjoy!
Posted by Anna Presswell at 14:46