Diabetes Soup: Thirty Years at the helm of Type 1

When I first started this blog, almost seven years ago I wrote, "My name is Anna and I am many things. I am a daughter, a sister, a friend, a fiance, a full time worker, a wannabe surfer, an animal lover and a girl. I am also a Type 1 diabetic (insulin dependant, juvenile onset, the beast has many names)... I have been through every stage of adjustment with the condition. I was the child who didn't quite understand it, the teenager who resented and fought it, the adult who started taking it seriously and now I am the girl determined to make it my own." 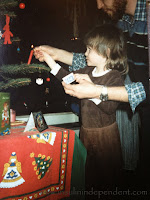 Thirty years ago on Christmas Eve, my parents brought me home from the hospital in Germany, newly diagnosed and with a challenge beyond anything they could imagine.  The magnitude of their challenge could not yet have been known to them, because only those who have lived through a chronic condition like diabetes could know how every aspect of life could be turned upside down by something as innocuous and seemingly toothless as a pancreas with no ambition.

Thirty years on, with almost a quarter of that time spent writing a blog and regularly exploring the sometimes inexplicable world of my own thoughts, I now know that I was naïve to think I was only one thing at a time. My ongoing states of diabetes  - the child who doesn't understand it, the teenager who fights against it, and the adult who has come to accept it - aren't mutually exclusive.  Sometimes I am a big bowl of diabetes soup (35g carbs, pre-bloused).

This year was the hardest of my thirty years.  With a child of my own now just three years younger than I was when I was diagnosed, I have had little time to focus on myself, but in the most wonderful of ways.  It is hard to care about the highs and lows, the carbs and counts or routines and basal reductions when my daughter's needs seem more urgent and important than my own.  For much of this year I was the mother who ignored it, because my girl was always one notch higher on the to-do list.

As my thyroid packed up shop and the sensor got lost en route to the outside of my leg, I was the adult who resented and once again didn't understand it.  I had a whole new language to learn about thyroid, iodine, overactivity and antibodies, and all those years of acceptance and embrace melted away in the face of the seemingly unmanageable tasks. Every day I worried about the what ifs and could-it-bes of my daughter also being diagnosed one day.  I can't think about that for too long, I have to let those thoughts drift away before the imagining the worst becomes my obsession that day. I found the DOC an overwhelming place to be and carried out a mass exodus of almost all of the diabetes groups I belonged to, sneaking out in the night like a shamed fraudster.  I didn't want to be in the DOC I once loved so much.  I was tired.  I still am tired.

But, as the tasks of motherhood became easier to manage and somehow my HbA1c kept steady at 7% (somethingorother in 'new money' mmol), I began to remember what I so loved about blogging. And as I was voted a respectable 62 on the Feedspot Top 100 diabetes blogs worldwide, the recognition flooded back that this is my safe place to say all the garbled junk I have to say, and that being a big bowl of diabetes soup with a million emotions spilling out of me - sometimes all at once - is OK. It's OK to be a diabetes soup sometimes.


I hope that in another 30 years I will be here still, living the life I have been blessed to live, and that diabetes will be a thing of the past.  But if not, I hope I will still have the thoughts to share, the words to write, and the voice to speak about my big old mixed bag of diabetes experience.
Happy diaversary to me, and Merry Christmas to all of you.
Posted by Anna Presswell at 12:41 1 comment: