Pump failure: pregnancy panics and the cocoon of the DOC

It took me a good six months to trust the technology after switching from injections to insulin pump.  And at first there were a great deal of bumbling involuntary midnight cannula changes, kinky moments and at times I was sure my equipment was trying to kill me .  But slowly and surely as my HbA1cs came down, my hours of valuable sleep went up and my quality of life started to soar, it wasn't long before I would have made for the mountains beyond Rio if the NHS had tried to take my pump back.  It was mine: managed by me, and part of me.

Fast forward five years and with the introduction of Continuous Glucose Monitoring (CGM) into my life and a growing baby in my belly, and the idea of coming off my technology, even briefly, gives me the shivers.  Granted, I dream of the day when I'm no longer tethered and catching my go-go gadget pancreas on door handles or unsuspecting strangers I stand a little too close to, but my choice to remain on a tubed pump indefinitely is based on five good years of a happier, healthier me.  And my choice to use an Animas Vibe which can integrate the Dexcom CGM I use, as well as being waterproof, is a decision I've never looked back on.

But I still like to moan.  I am British, after all.  Diabetes, particularly during pregnancy, is extremely tiring.  There is no time to burn out because the kicking, wriggling bundle of joy in my belly means there is no taking my eye off my diabetes - well before and beyond the nine months that little hitch-hiker is mooching its free ride.

"I'm almost looking forward to the burnout after baby is born", I joked, bobbing around the swimming pool with my best friend of 22 years.  "I might even take a pump break.  I'm so tired of having to change the reservoir so often now that insulin resistance is in full swing." I said, not so jokingly.

Be careful what you wish for.

Three hours later and with a slightly watery reservoir change having taken place halfway though our spa day, my pump was making some pretty freaky noises.  The kind of noises a distress call from Wall-E might sound like if someone tampered with his electrics.  Noises which I instinctively knew would make for a long and worrisome night. 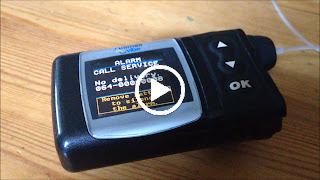 Driving home I un-hooked my pump, because the semi-permanent not-very-rhythmic vibrating it seemed to be favouring, teamed with the intermittent squawking gave me little faith that I wanted to be connected to a malfunctioning pump with a full reservoir of insulin.  As I reached my home I dashed inside and dialed the number for Animas, knowing that at 5:45pm it would be the support team over the pond in the states I needed to speak with.

While on hold I took a photo snapshot of my basals profiles (which thanks to insulin resistance are barely recognisable and certainly not memorable since the last trimester of pregnancy kicked in), just in case my pump died all together.  This was my best move that night, given that five minutes later while running some checks on the pump, the buttons gave up all together meaning the basal menu was firmly out of bounds. After a few checks and the inevitable diagnosis that my pump was kaput, and the Animas team had fired off an email to the UK office that I would need a replacement ASAP. Awesome.

But that was really the easy part.  Now I just needed - while 7 months pregnant and with diminshing leels of insulin in my system - to figure out how the hell to make the transition back to injections.  I had, of course, ordered in some spares of my pre-pump insulins Lantus and Lispro when I fell pregnant, knowing that this day may come, but remembering what the hell kind of pattern I was in, when to take the background insulin and how long it might take or that insulin to kick in, felt overwhelming. My last (unsuccessful) pump break had been 4 years earlier and had seen me back on my pump within 8 short hours, so my track record for this kind of manouevre was not good.  Ordinarily I would have just fumbled my way through, but with each swift kick to the inside of my abdomen, I was reminded why this would not be the ideal time to experience my first adult diabetes-related hospitalisation. It was not a time for 'winging it' or making mistakes.

I quickly took to social media as fast as my fingers could type, because having called my clinic a good two hours after they had closed their doors I'd found no-one there to speak to for advice, unsurprisingly.  It was then that I started to panic.  And it was then that the cocoon of the Diabetes Online Community came to life. 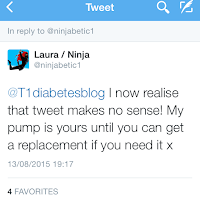 Within an hour of frantically typing out my garbled requests for advice I had friends from Devon offering me spare pumps and 'strangers' (whom I feel connected to in indescribable ways) wishing me well.    An hour after that diabetes nurses were offering me advice on what to watch out for and when to test.  An hour after that I was tweeting messages to one of the lead specialists at my home clinic.  An hour after that I was texting my very own consultant for help after a fellow blogger offered me their number, having read about my situation online.  And an hour after that I had administered the insulins I needed and was settling in for bed, feeling secure with the advice I'd received, and that the remaining CGM technology I had going strong would help me keep an eye on my levels overnight 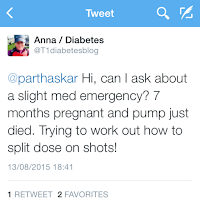 I woke up 2-3 hourly during the night, and managed levels of 8-9mmol throughout.  Higher than I would have wanted, but acceptable considering the back-story.  The next morning the inevitable rise started as the Lantus still had to take effect (having learnt on SoMe that it can take up to a week to become truly stable!), and the two-hourly injections weren't quite keeping me where they should.  But, five hours into the day and after a desperate call to Animas were I firmly played the pregnancy 'card' (cheeky, yes.  Shameful, I don't really care...) and begged them to get the replacement to me that day, and my new pump had arrived. Thankfully, they did.  They probably heard from the wobble in my voice that of all days to go the extra mile, today would be one that truly counted to one very tired and frought person.

The next three days were a roller-coaster of results from the initial highs to the eventual too-much-insulin-sticking-around lows, but my pump was back on, and the baby playing bongos on my kidneys was telling me it was worth it. 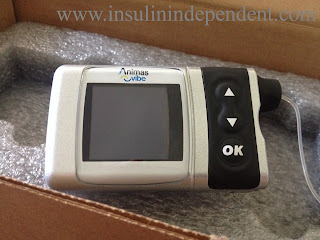 Without the DOC I would have muddled through somehow.  But that was how I spent my childhood and teen years, before Social Media became a part of the arsenal I use to manage diabetes; I muddled through.  Since the DOC emerged, and at times like this, it helped me feel safe, secure, empowered and in my time of need, cocooned.  And for that it is worth its weight in gold.
Posted by Anna Presswell at 08:38 No comments: