With all eyes on the London 2012 Olympics, exercise and personal achievement are hot topics of discussion.  Watching our celebrated British rower Sir Steve Redgrave with his own lazy pancreas issues carry in our Olympic torch was certainly a moment to celebrate.  A couple of years ago a moment to celebrate for me was getting out of bed in one motion, eating a bumper portion of fried chicken or getting out of a chair without making that noise.  You know, the one that kinda goes  'oooourgghhhhh', followed by a sharp outlet of breath.  But over the last two years things have changed for me; something shifted.  I got tired of always feeling tired.  I missed the figure I once had and I realised how much I missed being active.  Outdoors had become a place I no longer had the energy or desire for.


I'm not sure where it was I took a wrong turn in the road, but I hazard a guess that it was a mixture of going to university, where gym memberships and healthy food were a thing of the past and drinking was all the rage, starting a full time job and being exceedingly happy in my relationship.  Damn that happiness. *shakes fist in air*


In the last year however I have been clawing back whatever residual fitness I had left and could force our of hiding, and started exploring a different way of eating and exercising. But while my diet and attitude started to improve, I made no secret of the fact that managing blood sugars during exercise was a challenge I had no idea how to handle.  Failure happened frequently in even my best-laid plans.  Gentle walks in the country led to serious and embarrassing hypos and gym classes led to kidney-bashing blood sugars I could have achieved by saving myself the effort and sweat and chowing down on a bag of sweets instead.  I reached the point where I would go to an exercise session armed with insulin in case I went high, lucozade in case I went low, bananas in case I needed a littler something before exercise, and protein shakes to try and keep sugars stable (again, deludedly) both during and after exercise.


It was on the sports weekend run by Animas that I was given the tools I needed to start understanding what was happening in my body during my exercise sessions.  I learnt to abandon the bananas, get more confident when reducing basals and exercise as regularly as possible to reap the full benefits of more balanced blood sugar levels.


Piece by piece things started to come together.  The kidney bashing reduced, hypos happened far less frequently and eventually I was even happy to try new exercises, having grown in both confidence and skill at managing that beast called Mr Hyde.  I went from being the girl who hid at the back of the class, dressed head-to-toe in hideous black baggy clothes, hovering somewhere between the water-cooler and the exit (or 'escape' as I called it), to picking new classes, actually saying 'thanks' to the instructor afterwards and even bought myself some shockingly skin-tight running trousers.  And I mean spray-on kind of tight!

On the Saturday just gone however, the spray-on tights, tireless pre-, during- and post-exercise blood-testing and the trying to be as patient and scientific as possible, finally paid off.  I had my first real break thorough.   I arrived at the gym, having been hovering around 5-6 all morning and having lowered my basals to 50% an hour before exercise.  I'd eaten a healthy omelette for breakfast and tuna salad for lunch, so I knew I had some protein in board and that I wasn't likely to have any crazy highs.  I tested my sugars and a 5.6 was staring back at me.  A year ago I would never have dreamed of exercising at 5.6.  If I'm honest, I wouldn't have even 3 months ago.

Well, contrary to the Dr Pepper adverts, I didn't run into any problems after asking that, somewhat dangerous, rhetorical question.  Halfway through my spin class I tested.  5.1.

'OK, OK, I'm happy with that, let's keep going and see what happens.'

I reached the end of the class and nervously tested again.  There's no way I will have scored a hatrick.   But there it was, a perfect 5.2.  The elated and somewhat unhinged grin on my face must have scared the living daylights out of the other spin goers that day, but it would have made a difference even if I'd noticed, or cared.  That was my first great success. The next two hours were made up of 6s and 7s, settling at 7.4, three hours later.

The moral? Keep at it.  The grass on the other side really is as green as it gets...

There are a few dates in the calendar diabetics round the world ear-mark in the diary with a big red circle surrounding them. These are the dates when the (rather ominous sounding) ‘nine tests’ are carried in order to make sure we can still earn our tax money and don't need carting off to the nackers yard, just yet.  These include blood pressure, smoking status, a marker for blood glucose called HbA1c, urinary albuminm serum creatinine, cholesterol, eyes, feet and my personal favourite, weight.  The latter usually being pre-empted by a twitchy Anna standing on the scales professing that, 'I just joined a gym and have already lost a couple of pounds.'  I am lying, most of the time.

You've no doubt seen these nine tests mentioned in the media recently because figures from the National Diabetes Audit discovered that just over half of all Type 2s and a third of all type 1s are not receiving the full range of tests, meaning people with complications, or at serious risk of them, are falling through the cracks. In the NHS? Surely not.

I am glad to say that I am one of the two thirds of type 1s who do make the effort to get all nine done. But I should probably mention that I also have my consultant on speed dial (he just loves this, I can tell), my nurse on email and have inadvertently added my dietician to my broader social circle, through what can only be described as proof of the existence of the 6 degrees of separation.

But still, it does take effort to get them all done and relies on GPs, consultants and now, ourselves to be paying attention. Until 3 months ago, I didn't even know these were a benchmark for basic care. I just did it year-in, year-out, regardless.

It's part of the deal if you want to stick around.

Well last week was my annual occular lap-dance, when someone shines a light into your eye at a distance which would be considered sexual harassment in any other situation, so they can see into your eyes and check that everything is still as it should be. These had at one point in my life increased to every 3 months, because although my diabetes team did it subtly, due to many years of increased blood glucose (BG) levels my eyes were already beginning to show signs of damage, and I had to be transferred to a specialist lap-dancer who would assess whether or not to laser them.

I always go into these with a level of nervousness now. Although kidney-explosion (they don’t actually explode, that was for when (if) they ever make the film of this post…) is my biggest diabetes fear (if my absurd reaction to 30-second HBa1c test is anything to go by, I will need to be fully sedated for dialysis), a close second is going blind. As much as I want a dog, currently forbidden by my husband and cats, it's an extreme way to get there. Sneaking one in during the night and looking after my eyes is a much better way to go.

Holding my breath (partly due to nerves, partly because I can't remember if I ate garlic last night and the doc is now 1.5 inches from my face), I wait for the results. I search for a clue on his face at every opportunity, convincing myself that each tiny move is a secret 'Well, we kept it at bay but I better tell her,' being spoken through the medium of body language.

Well I am pleased to say that thanks to my leap into the pumping world, finally joining the gym (for real, not just because my annual chubb check) my acceptance that Simvastatin (now Atorvastatin – more on that to follow) and low-carb lifestyle, I am still managing to keep problems at bay. I have got evidence of the death of some blood vessels, but the real risk is when smaller, weaker blood vessels try to grow back in their place. These break, bleed and eventually need to be corrected by laser (not the kind on the TV adverts). This procedure can often leave you without peripheral vision, and your driving license.

For me however, things are still looking good (sorry about the pun). I can rest assured that if I continue to keep going as I am, I won’t be another statistic.

Are you getting the full nine tests?

Posted by Anna Presswell at 04:37 No comments:

The Big Event - Pumps, Apps and other gadgets....

Next weekend a great sounding day known as 'The Big Event' is taking place at the Rootes Building in the University of Warwick. Along with a series of workshops, the latest news on diabetes research, tailored information and the opportunity to meet with other people with diabetes - type 1 or 2 -  INPUT's own Melissa Holloway will be giving a talk called 'Pumps, Apps and Other Gadgets.'


You KNOW it's gonna be good!


Check out full details here, and get yourself there!
Posted by Anna Presswell at 10:57 No comments:

You know you want to

Well ladies and gents, next weekend marks the occasion when INPUT bring the next in their series of insulin pump roadshows to Nottingham. So if you want the most up to date information on insulin pumps and who could have access to one according to the NICE guidelines then come along and join us.... 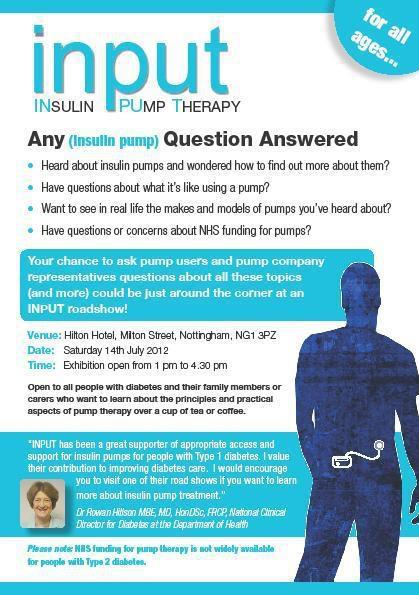 Posted by Anna Presswell at 10:30 No comments: