If you have type 1 diabetes and need to keep insulin cool, then you will undoubtedly have heard of Frio.  When travelling New Zealand at the beginning of the year my Extra Large Frio case became my best friend for keeping my meds in happy holiday mode.

When Frio UK contacted me to ask me to take a look at some new products I was glad to because, frankly, I heart their products.

Here's what I thought!

Check out their shop here.

If you have any questions about their products feel free to drop me an email at anna@insulinindependent.com.
Posted by Anna Presswell at 00:36 No comments:

Two weeks ago we, as a family, welcomed my little girl into our lives. Having seen my unwavering efforts to keep blood sugar hikes and spikes at bay during pregnancy, I was whole-heartedly congratulated on a job well done by my family members (aka, 'the help').  Inside, I congratulated myself too. It was a slog, but I did it.
Throughout pregnancy, my aim was to keep my diabetes as balanced as possible, without becoming a massive control freak and giving birth to one stressed-out neurotic little kiddo. But after 9 months with an HbA1c in the low 6s, healthy squishy bits and a full term pregnancy, it felt like the challenge (war?) had been won. Two weeks on, it has dawned on me that the challenge (war?) is only just starting.
Immediately after she was born, I smugly looked at my CGM trend thinking how very much I had 'this'. My nice steady line with occasional above 10 mmol spike painted the picture of a mother absolutely nailing post-birth blood sugars. Two weeks on, and even my CGM trend arrow is trying to show me where I went wrong.
My once 'never away from my side' receiver now shows a sorry trend of gaps and spikes. The gaps telling the story of it having been left in another room, far from anywhere conceivably useful. The spikes sharing its tale of alarms smothered into silence at the bottom of a nappy changing bag - often rummaged around in, but never for the CGM. The weathered tally gear case shows its age, and the precious upper and lower alarm limits set beautifully at 4 and 7.5mmol (target numbers for pregnancy) now stand at 4 and 13mmol, because I had to turn off the alarms which have been the electronic nag in my life since February 2015. The battery uncharged for the third time in this week. A sorry tale it tells. 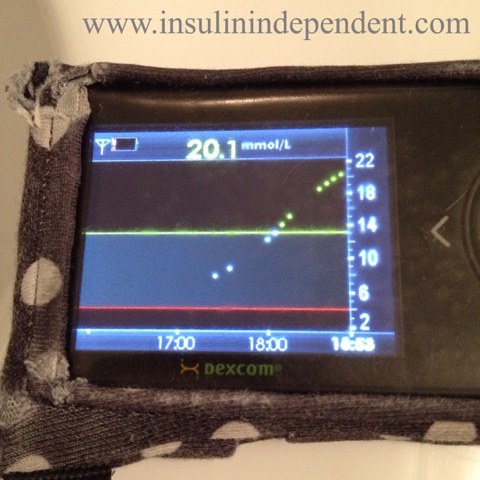 Am I lazy diabetesing? Well, no. Right now I'm adjusting to a new normal beyond anything I could have imagined. My kid is amazing, but in a world where only last night Jamie and I celebrated sleeping in the same bed for the first time in two weeks, there is no room for diabetes 'perfection', if there even is such a thing. If there is, it probably holidays with the 'compliant diabetic' and the 'optimal control' gang.
Right now I'm living day-to-day, in survival mode. And while I thank my situation daily to be able to use a pump and CGM, right now, as I learn tricks of the trade for getting dressed AND having a shower in one day through a fog of sleep deprivation and survival naps, my diabetes has to just tick by on autopilot. My pump means I always have insulin when I leave the house, and my Dexcom is the safetynet of blood sugar mayhem. Anything in between 'way too high' and 'plummeting like fuck' is pretty much OK.
The time will come when I have the headspace to basal test between breastfeeds, and prepare blood sugar friendly foods between vomitted-on outfit changes. For now, I'll stick with survival mode
And on we must go.
Posted by Anna Presswell at 12:06 No comments:

Diabetes and Pregnancy: The End Game

Today is the first day of diabetes awareness month, centering around November 14th, World Diabetes Day.  As the days of the month turn over like pages of a book, social media fills up with information, opinion, blog posts, product launches and events.  For me, November has always been about educating, advocating, empowering and de-stigmatising a condition that affects millions around the world.  This year, it represents that little bit more because today, November 1st, 2015, my little girl turns one week old.

November this year represents both a new chapter in my life entitled 'motherhood', and a new chapter in my diabetes life of being a mother, with diabetes.  As I learn about the fun and foibles of being a mother - of breast-feeding and explosive nappies, of pram construction and bedtime routines (or total lack of them, if my little one week old is anything to go by) - I also now have to do so alongside learning how to manage my diabetes with this new beautiful person in my life - one who needs me to be on my game around the clock.  Learning how to prioritise when a hungry baby demands a feed after I've bolused for my dinner, or how to manage the blood sugar drops of breast-feeding or of remembering to check my blood sugars when my CGM alarms rather than treat the hypo it says I'm having because I'm just too tired from a bad night's sleep.  How will I treat a hypo when baby needs a feed?  And how will I keep my HbA1c from drifting as my focus is pulled in a direction other than my diabetes?  Time only will tell.

This year November and beyond is about learning how to do diabetes all over again.  It is about resilience and re-educating.  It is about finding balance, and about using the technology I have at my disposal to make diabetes a big enough priority in my life that the control and quality of life I enjoy so much aren't sacrificed, without leaving my child thinking diabetes is number one.  It isn't. But in many ways diabetes was easier to manage during pregnancy because it was all I had to do.  If my levels were wacky, a short walk could bring them down swiftly, and appointments were no issue to attend because it was just me to worry about.  Now, there is another person - one who cannot reason or wait -  whom I need to think about first.

Pregnancy was without a doubt the most challenging period in the time I've had diabetes, made up of equal parts determination, joy, frustration and fear.  But the end result of careful planning, resilience and keeping my eye on the pot of gold at the end of the rainbow was a healthy baby girl, all 7 pounds 11 ounce of her.  Only this pot of gold isn't the stuff of myth, she is very much here. 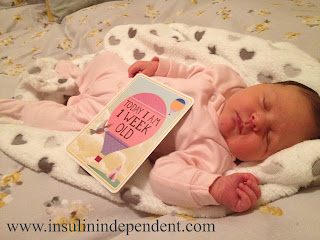