As a type 1 diabetic there are many things that frustrate me about the condition; kinked cannulas, ignorant comments, doctors surgery staff (who seem to get paid to raise by blood pressure), people who assume I got it because I was fat (nope, I just love pies) and when my pump has been warning for hours that I'm about to run out of insulin, yet i somehow still forget it and end up going high, to name a few. But perhaps the most frustrating situation for me as a diabetic, is exercise.

There is no exercise which is bad for you and the truth is everybody out there, diabetic or not, should be exercising. Our ancestors didn't get us here by watching 'Come Dine with Me or 'CSI: Miami'. Instead they exercised. A lot. We are taught that any exercise is better than none and we are constantly bombarded in the media by images of morbidly obese people who we are told didn't make the effort to do enough exercise.

But for me exercise has such dramatic effects on my sugars that it is the last great paradox when it comes to my diabetes self-management. This is because when I do gentle exercise, my sugars go down. But with strenuous exercise, they go up. They go up a lot. The technical reason for this is that when you exercise gently, your body uses up the glucose in your body as fuel. However, when you increase the intensity, you put your body into 'fight or flight' mode. The stress of that exercise tells your body (as our Come Dine with Me watching ancestors knew) that you either need to wrestle that mammoth to the ground, or run the hell away from it! What happens, is your body releases adrenaline and cortisol in order to provide you with an extra boost of energy. Unfortunately these two hormones also blunt the body's response to insulin. In a nutshell, it means that when I do something as intense as body combat (a new love of mine and the most intense workout I have ever done) a few hours after the workout, my blood sugars go through the roof, thanks to the tiger-tackling adrenaline my body released earlier, which subdued my insulin response.

The frustration is that even though the exercise benefits me so greatly by increasing my heart rate, strengthening my heart, lungs and muscles and providing that all important circulation boost, the blood sugars of 15mmol (270 mg/dl) when the normal range is 4-7mmol means that all my other body parts such as nerve endings, kidneys and eyes are now being damaged by the excess sugar in my blood stream. Added to this, if I now correct that high blood sugar, that sugar which is in excess to what my body needs, will be stored as fat. Slightly frustrating considering I just hurled myself around a room for an hour for the purpose of improving my health and losing weight.

You could argue that I should just always go for a walk or gentle jog. But for me, when I exercise I like to really feel like I've exercised. A gentle stroll feels about as challenging to me as a good hard knitting session or a really vigorous deep breath! I like to come out shaking, a little light-headed, covered in sweat and itching to come back tomorrow.

Well after several weeks of Sunday morning body combat followed by horrendously high sugars, for the first time today after 4 weeks of trying, I actually got somewhere. Through a process of experimentation, over the last month I have amended just one thing each time to see what might help. I won't go through each week because I've already rambled on enough, but I thought you may find it useful to know that I started this morning off at 8mmol (a little high for me) and am now stable at 7.5mmol (a first after combat). The key for me was:

So far since the class I have not moved from 7 which as far as I am concerned is a huge 'win'. Next week will be the big test because if I know my diabetes, I will have a job keeping everything the same from week to week. But it is a start. And a good one at that.
Posted by Anna Presswell at 05:22 No comments:

Fundraising can be something of a tricky issue especially in these times, because while most people are happy to give money to a charity close to their heart, simply walking about with a charity collection box won't always cut it. Yes, you may collect some £££s from members of the public you approach in the street but having done it myself, you feel more as though people are paying you to go away rather than happily supporting your efforts. They will often only give a few pence and they certainly won't want to learn about the charity you are collecting for and rarely care which disease, condition or cause you are supporting.

Personally I too would rather pay £50 to take part in an activity or event which I can feel part of, over dropping a couple of pounds I won't really miss into a box I haven't really even taken notice of for a charity I probably didn't identify. You know what they say, nothing comes for free.

So I was rather pleased when I found out that the blast-off bootcamp gang had decided to run a boot-camp for which all proceeds would go to the Diabetes Research and Wellness Foundation. This sounded right up my street and it wasn't long before I had my fellow boot-campees with me in the form of the fiance Jamie and the work-mate Nicole, who in turn brought her daughter Tarron. I roped them all in and signed them up to a Sunday morning on Southsea common. The plan: Sweating our backsides off for diabetes

We arrived to find Sarah from DRWF already there and raring to go along with about 4 or 5 others, all of whom seemed to be much more on first name terms with Mr Fitness than me and my little gang! But nevertheless before long there must have been 16 of us all donning our Lycras, limbered up and ready to go

The first half of the session was made up of circuit training style exercises like squats, lunges, star jumps, burpees (yowzer!) and wobbles (do NOT be deceived, they may sound cute, but they are certainly not!). After about circuit one or two Nicole was already throwing me looks which said "You owe me cakes on Monday my friend!" and the two of us exchanged regular "oh my god's" and "I'm not sure I can get up from here's". But the giggles shared between us as we failed yet another press-up or made funny noises during sit ups was in itself, good for the soul.

For the second half of the session we moved outside to play a series of games like stuck in the mud (remember that? Well Blast Off are bringing it back!) and a game where we all stood in a circle with joined arms while someone had to chase a basketball bib which was attached to someone in the group. While we were out there I kept noticing people looking at us as they parked their cars on the seafront no doubt having a gentle Sunday stroll. I imagine they weren't bargaining on a group of 16 smiling, charging and very flushed-faced lunatics bombing around the seafront! As we progressed with our games I felt the briefest moment of embarrassment as I lolloped around the field, but thanks to the fun we were having and the endorphins flying around my body, I didn't care for long. After a fleeting moment of pride, I got back to my task, not getting stuck in the mud!

We finished our session with some stretches and the mandatory group photo which was sprung on us at the moment when we probably looked our worst - but those moments make for the best photos, don't they? :) As Jamie popped in our £20 I felt shattered, but somehow energised and glad that I'd been involved.

So here it is, the photographic evidence. Although it appears the camera may have been wobbling at the time the photo was taken, I expect it is quite the opposite. I expect we were the ones shaking! You can find yours truly over on the right hand side, matching the bright red DRWF t-shirt I was sporting. Nice picture there, Po! And if you are interested in Bootcamp, I would recommend this one where they won't just shove you in the right direction exercise wise, but also give excellent advice about food options and how to eat in a way which looks after our precious bodies that little bit better. They were certainly good enough to dedicate their own time, effort and exertise in support of those of us with a slightly more uphill battle when it comes to looking after ourselves. 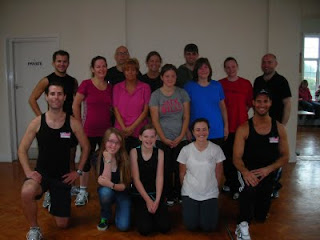 Will you be joining us next time?
Posted by Anna Presswell at 12:02 1 comment: