The diabetes gods of mischief 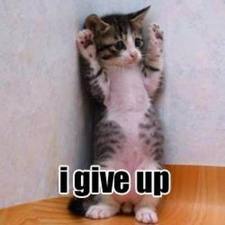 Me, at 3pm this afternoon.  Being held ransom by my diabetes.  Cute, aren't I?

You would think that after almost 26 years of playing host to diabetes that I might, by now, have this arguably repetitive condition down to a fine art.  But then you would be wrong.  Now and then, when the gods of mischief fancy a giggle, all efforts, planning, due care and attention, calculations and meticulous implementation of best practice goes up in smoke, and you are left with a tantrum having toddler of a condition, hell bent on playing games with your day.

I was already riding on the high side when I woke up this morning, rocking a a 14.2mmol (255) thanks to an overnight hypo.  As I forced myself out of bed and quite literally threw myself down the stairs (it was the only way I was going to get myself out of the door today!), my first correction bolus of the day was delivered.

The morning was largely uneventful, littered with the occasional 'hmmmph'- enducing blood test.  Thanks to having to gone to bed far too late (teenagerish) and flopping out of bed with too little time to make breakfast and lunch (need to be organised, much?), I decided today would be a great day for a fast.   Of course, the mischief gods of hunger were at play and by 10.30am, I was ready to eat my own arm. Or anyone else's if they happened to make the mistake of handing me anything over the desk.  I can only apologise to the poor postman who looked a little bemused when he handed the ravenous girl at the desk a bag of envelopes, with his forearm on show.

As lunch came a calling I gave in; I had to eat something.  Of course, mainstream cafés don't really cater for the low-carbing PWD, so the food on offer was basically carb with carb, with a side order of carb.  I chose a jacket potato but went for cheese and beans, hoping to lower the GI rating.  I bolused with about 15 minutes to go before eating, and then tucked in.  One hour later, I was 19mmol (342).  Hmmmph.

A speedy 3-circuit walk around the park to please the mischief gods of the post-prandial (post-meal) high, didn't even touch the sides as I returned to a result of 22mmol (396).  Feeling by now like I'd been smacked in the face by the flu-gods, with muscles aching and face-ache to match, I started to stack my boluses (taking several doses of insulin too close together and against the advice of the pump).

Having not seen any improvement in my BG levels, despite some swift exercise and some very dodgy stacking of boluses, it wasn't long before I started to panic that I may have a kinked cannula (meaning the 'no insulin gets in mischief gods' may be lurking).  Three blood tests within 45 minutes later, the result started to come down.

Of course, knowing what we all know about bolus-stacking (it's for idiots, don't do it), I was now sure that my cannua in fact did work and all that reckless stacking was likely to come back and haunt me.  There are gods for that, too.

Having predicted my own demise, the 'in your face you gave too much insulin mischief gods' have only just stopped mocking me, having sent myself  flying down to a wobble-inducing 2.9mmol (52) even the most hardened mischief god of hypos might find impressive.

Today, has been sheer diabetes chaos.

But it's OK.  I am giving the gods of mischief my very best 'whatever' smile and am cunningly plotting my revenge tomorrow.  Little does it know, tomorrow I will be bashing up my diabetes in the gym, starving it of carbs (it hates that, because it is forced to behave) and socking it one right in the diabetic face (just for fun).

No more holding me ransom!

Any of this sound familiar?