It is no secret that I have been in the Medtronic 'fan club' for some time and I make no apologies about the praise I give them for their customer service. On countless occasions their customer service team have pulled me out of a tight spot following a bout of bumbling clumsiness. I include in that the time I accidentally hung up from someone on the Medtronic team thanks to the fog of hyperglycaemic sugars I was wading through only to find out they had spent around 30 minutes trying to get back through to me. I learnt recently that this is policy, because the patient on the other end of the phone could have collapsed. It's kind of fuzzy and cuddly to know that, isn't it?

I should add here that I only have one other company to compare them to and make no assumptions about the likes of other big players in the market such as Animas and Accu Chek. Unfortunately my brief encounter with Omnipod left a lot to be desired which has probably nudged me an few steps closer to camp Medtronic. I was among the many thousands of pump users in the country just falling over myself to get to the Omnipod - the worlds first tubing free insulin pump - which landed on our shores in the summer of 2010. However, after 6 months of unanswered emails and forgotten voicemail messages, my correspondence clearly got forwarded to someone much higher up (and overseas, I might add) who couldn't have gone to more effort to get a demo pod to my doorstep. It was just a little too late at that time. I am hoping that the issues I had were a one off and that other people out there have not only had the chance to try it, but that if or when they had an issue it didn't take 6 months to shoe-horn a response out them!

So all being said and done, it's pretty clear that Medtonic have brain-washed me into rubbing their Big Pharma egos and writing about how marvellous they are. The fact is, I would LOVE to bring you a story about how they let me down or dropped the ball, but just recently they not only impressed me with their super-speedy nothing too big an issue attitude, but actually left me speechless. I know. That must be just as newsworthy as the time Victoria Beckham ate a burger and the time Katie 'Jordan' Price said something intelligent (that's' un-thick, if you're reading this, Katie).

The story goes that while at the Medtronic Office in Watford recently, my local Med-rep Polly Haycocks spotted that I had a crack in Maggie (my pump). Feeling a little sheepish about the fact I probably acquired said crack by either dropping it/dragging it like a dog lead after forgetting it was attached to me/walking into door frame/falling out of car/catching it on door handle and any or all of the above, I thought it was being pointed out that I had damaged their precious product. In fact, the revelation that I had a crack in my pump appeared to light some kind of small fire underneath Product Support and Customer Service Manager Pat Moore, who like a whirling dervish set about ordering me a new one. Now if you've ever ordered anything online you will know that if you are lucky enough to have something in stock, you probably need to wait about another 5-7 working days before your product arrives. Well after no more than a few questions about what colour I would like and was anyone at home today, my new pump was on its way to me. Impressive enough statement on its own, but as it turns out my brand sparkly new pump actually reached me in under 2 hours!

Now I have no doubt that it helped somewhat that I happened to be at the Medtronic Headquarters office at the time and that I happened to be meeting the Products Support and Customer Service Manager, but still - under 2 hours to swap out my old pump, which was literally whipped out of my hands and replaced. No forms, hassle, interview or Spanish Inquisition to get to the root of the damage!

So it is with great pleasure that introduce you to my new pump - Lord Pumpington (in electric blue no less!) 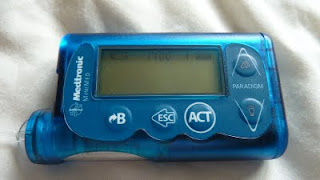 Once again I have to take my imaginary hat off to Medtronic and hold my hands up - they have once again jumped a foot high when I ask for an inch!
Posted by Anna Presswell at 11:58