I have now been trialling the Medtronic Enlite CGM sensor for around 4 weeks and feel that as my trial draws to a close and the time when Medtronic will have to rip the sensor from my tightly clasped hands draws closer, it might be time to fill you in on my experience.


The people at Medtronic have been openly proud (and rightly so) about the improvements they boast on their new Enlite Sensors. These improvements include a 69% smaller sensor and an automatic inserter which not only allows for much easier insertion, but also hides the needle; a big deal if you're jabbing it into a kid or needle-phobe (I know, needlephobic diabetic- tough break! ). Along with this they claim improved accuracy (98% of hypos detected) and a more comfortable wear in general. Big words, I know.


I have now had a full month of wearing sensors and feel I have experienced enough to give you a decent idea of what a difference there is between this and their primitive version, the Sofsensor. I mean, I could have updated after 2 days, but having been so pleased I was offered this trial in the first place, it wasn't going to be all that unbiased was it?


Let's start from the beginning.

Having had a chance to directly compare one of the old sensors with the new, I was already impressed with the smaller sensor before I even attached my first Enlite. The sensor was visibly thinner, shorter and perhaps most importantly if you brushed your finger over the end of it, felt like a hair compared to piece of metal. Unfortunately my old laptop has died a technological death, which means I have also lost the photos of what my stomach looked like when I tried to wear the old sensor for 8 days (which is probably convenient for Medtronic - not the best advert I've ever seen). Other than the immense irritation, apparent under-skin bleeding and lump that I was left with, the truth is the accuracy was so poor that it really didn't seem to be worth it.

Well so far this time around although I have unfortunately not been able to get more than 7 days out of a sensor (although some friends also taking part in the trial managed 12), the comfort is not what has stopped me carrying on. In fact, after a full 7 days there was no point at which I felt irritated, sore or even particularly aware that I was wearing the sensor. Compared to the generous 3 days I managed without irritation last time, this difference was huge. I can also advise that the friend who did make it to 12 days told me that she removed it due to waining accuracy, not due to irritation. Not bad for a product with a guide of 6 days, ay.

So it's all round thumbs up on the smaller sensor.

This one is another big thumbs up for me. I don't think I felt particularly repulsed by the other inserter Medtronic had in place, but having said that I also wasn't aware of how much I disliked injecting until my first week on the pump had passed and I realised that ever injecting again appealed about as much as a roll in the hay with Noel Edmunds. The fact is the new device (below) means no more faffing about removing tabs and flaps and worrying that if you unflap the wrong tab before you untab the right flap, you will have lost the sensor all together. With the new inserter you don't even have to touch the sensor until you are removing the needle after it is already in. It has even been designed so that you can remove the sensore from the box and straight into the inserter, without even touching it. The casing is also recyclable, for those trying to ease the load on our plastic planet. Jamie and I now have sensor change day down to a fine art and thanks to the improved adhesion to the skin (by ensuring the sensor is fixed flat to the skin rather than 'flapping about') the wearability factor has gone up ten fold. 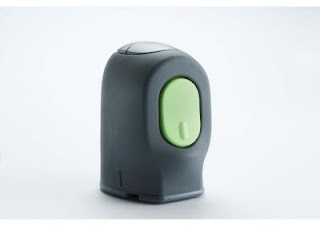 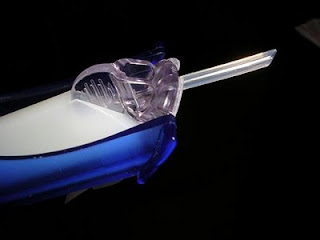 The tip of the scary-ass old inserter, spearhead and all!


Due to the sometimes wild readings of the old Sofsensor system, I never really worked out how the sensor managed to detect hypos other than by recognising that your blood glucose levels (BGs) were going up or down, which in itself does not necessarily mean a hypo will happen. You could go from 9 down to 6 which is ideal. A hypo alert now would seem premature. So I have been pretty baffled by the new enlite sensors which have at times alarmed when I was seemingly stable or nudging down very slightly. But far for me to be the one to pick it apart, it has been right almost every time. It certainly allowed me to make slight adjustments like snack on a handful of fruit here and there and manage to bump the sugars up. In fact, having had an appointment with my Consultant last week, he has said that he will support my application for CGM funding, because in just 4 weeks my average blood glucose has gone from 8.5mmol (which equates to an HbA1c of around 7%, apparently) down to 7.4mmol. That difference is just within the last 4 weeks, and I am not sure that would have been possible if the accuracy on the Enlite was not so great.


That being said, I am not here to just 'sell sell sell' for Medtronic and I did have one sensor which gave me some strange readings. However, I can recognise that having had a massive hypo 5 minutes before needing to calibrate the sensor for the first time, and then ending up having a series of badly timed follow up calibrations which collided with several meals/hypos, my transmitter was probably extremely pleased when I in fact took the sensor off 3 days early. The thing about CGM is that when it works well, it is possibly the MOST useful diabetes tool we have at our disposal. When it doesn't work, it is also the single most useless tool. I had several times this week when I was told I was 19.1mmol and going up (in fact I was 13mmol), and one incident where it said I was 6.9mmol and rising quickly alarming that a a high was imminent and when I tested I was 3.4mmol and apparently dropping. I did try turning it all off and on again but that seemed to have no effect. So I turned it off. It is most likely that my poor calibrations and frequent hypos were the issue, but I should still tell you so that you can have the full picture.

All round comfort and experience
Well, I have to say that as for all round comfort and experience, things have moved on hugely since the times of the unpredictable and extremely uncomfortable Sofsensor. I may have to go into hiding so that I can eek out just a few precious more moments with my transmitter before Medtronic cruelly and coldly take it back from me, like ripping candy from a diabetic adult. OK OK, so it's only because they were nice enough to give me this trial in the first place that I have had an opportunity to try it, but either way the message is strong: The Enlite Sensors have landed and they mean business.

If you have an opportunity to try one or are one of the people already benefiting (but only slightly) from the Sofsensor CGM system, I really would recommend getting a handful of the Enlite sensors. You won't be disappointed.

Medtronic's claims are not just a selling ploy, they are grounded. Of all the people trying the sensor in this trial, I have yet to find out who has not been impressed. Strong words for a bunch of talk-a-write-a-holics who love nothing more than to pick apart the system.

Anna - heading in the direction of Rio with a backpack full of food and transmitter still attached!
Posted by Anna Presswell at 12:59